The people of Carriacou and petite Martinique and by extension Grenada are mourning the death of former government minister Mr. Elvin nimrod who passed away on the weekend

Prime Minister Dr. Keith Mitchell paid respect to one of the men who stood resolutely by his political side for decades

After battling a period of illness former government minister Mr. Elvin Nimrod passed away on Saturday.

In conveying his condolence, Prime Minister Dr. Keith Mitchell paid tribute to a man he considered his brother.

Elvin G.  Nimrod was born on 27 August 1943 and raised on the Island of Carriacou.

In 1995, Nimrod entered the political arena and selected the Constituency of Carriacou and Petite Martinique to launch his political career.

Two years later he was appointed to the Senate.

In January 1999, he was elected on a New National Party (NNP) ticket and became the Parliamentary Representative for the Constituency of Carriacou and Petite Martinique.  He joined the Mitchell Cabinet and was assigned the portfolio of Minister of Legal Affairs, Labour, Local Government, Carriacou, and Petite Martinique Affairs.

He was later assigned additional portfolios which included, Minister of Foreign Affairs and International Trade and Attorney General.  He also served as leader of Government Business in the Lower House.

He has held several senior positions within the party including a stint as Chairperson and Deputy Leader of the New National Party.

Following the NNP’s election victory In February 2013, Nimrod was appointed Deputy Prime Minister and Minister of Carriacou and Petite Martinique Affairs & Local Government. He has also acted as Prime Minister on several occasions.

In June of 2017 Mr Nimrod closed the political door of frontline politics, telling party members “Some of you may have remembered that in the last couple of years I have been saying that no king reigns forever; “And anyone who thinks that he can is fooling himself”, those words he said before retreating into a quiet life.

A minute of silence was observed in remembrance of the late former government minister Mr. Elvin Nimrod during Grenada’s 47th Anniversary of Independence ceremony at the National Stadium on Sunday.

Particulars regarding his funeral arrangements are not yet disclosed. 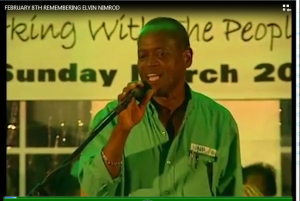 THREE TIMES IN A ROW