The crime and security situation in the Region demands greater collaboration and co-operation among the Member States of the Caribbean Community (CARICOM).

This was the view of the 20th Meeting of the Caribbean Community’s Ministerial Council for National Security and Law Enforcement (CONSLE).

Following a meeting here last Friday under the chairmanship of Prime Minister Dr Keith Mitchell, the Council agreed that increased co-ordination would achieve more significant results in the battle against the flow of illegal drugs and guns, trans-national crime and the heightened incidence of homicides.

Prime Minister Mitchell said that the current situation in Venezuela has the potential to impact the region and is in fact, already impacting neighbouring countries.

Regional security ministers reaffirmed the relevance of the management framework for Crime and Security in the Community and proposed elements of the draft agenda for a Special Meeting of the Conference on Security, scheduled for 3 May in Trinidad and Tobago.

The Ministers acknowledged that greater sharing of intelligence and data among the Member States was absolutely necessary to improve the security environment.

They also agreed to the establishment of a Regional Steering Committee for the development of crime and criminal justice statistics.

Prime Minister Mitchell asked his colleagues for frank discussion on the financing of the region’s security architecture and important institutions such as CARICOM IMPACS, the Regional Security System and the Caribbean Disaster Emergency Management Agency. 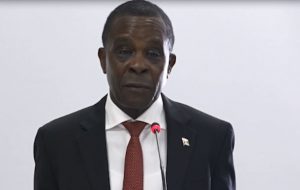