The perpetrator who attacked two Chinese business owners almost one month ago remains on the loose; but while the victims are said to be recuperating in good spirits, they are still uneasy.

One month after being hospitalized with severe chop wounds following a late night attack, 2 restaurant owners in St Andrew are now out of hospital, but still fearful for their lives.

Last month, Jack Su and his mother were attacked by a man while on their way home, after closing their business, a popular restaurant they operate in the town of Grenville.

The attack on the Cook Hill residents had community members sad and heartbroken.

Speaking to GBN News on Wednesday, Jack says he and his mother are recovering well, however out of an abundance of caution, they prefer not be seen or heard.

The mother and son who are Chinese nationals, have been living in the parish for more than 7 years.

Jack says they are likely to reopen for business sometime next month.

A number of suspects have been questioned, however, no arrests have been made. He said tremendous effort and time is put into this matter to find the culprit. 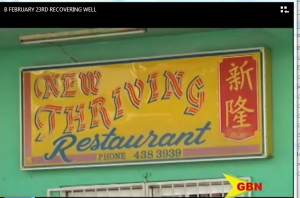