Trade Union represented workers at RBTT on Tuesday again engaged in industrial action demanding that their employer honour their requests and the judgments made by the Labour Commissioner Cyrus Griffith and Labour Minister Peter David.

President General of the Technical and Allied Workers Union, Andre Lewis said the bank has refused to engage the union and has instead sought to arrange a meeting with the workers to meet with the new owners – The Antigua Commercial Bank for 3 pm on Tuesday.

Lewis said the workers and the union have agreed not to engage the new owners until the local dispute is resolved.

He said the situation is unfortunate as some workers are willing to work with the new owners. 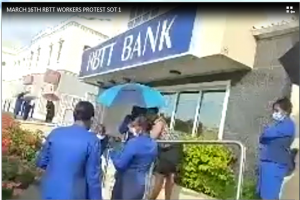 COVID 19 VACCINES CLOSER TO YOU