Police are investigating the circumstances surrounding the death of a 53 year old man whose body was discovered on Monday on a beach in St. David.

Valentine Lewis aka Machine, was discovered Monday on Requin bay around 6:30 pm.

According to reliable information reaching GBN, the body was found by a fisherman in the area who summoned the St. David police to the scene.

GBN spoke with a relative of the deceased Barbra on Tuesday, who told us her last contact with Machine was on the day before the unfortunate incident.

She says he will be remembered for his unique sounds.

Several attempts to get a comment from head of the community relations department, Superintendent Vannie Curwen proved futile

Less than three weeks ago the body of another St. David resident was found pinned to the ground by a fallen tree.

Police are also investigating this incident. 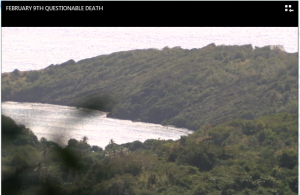