PWU PROMISE NOT IN WRITING

Is it another show of good faith in government with the promised payment of the 4 percent increase in salaries for public officers at the end of August?

Public servants have turned out in droves to march and protest on the streets of St George’s, held candle light vigils and in some instances as with teachers taken their lunch hours outside of schools.

They have adamantly made their distrust in government known however, are now seemingly keeping faith and confidence that the powers that be will keep their promise. 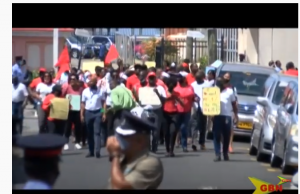