PUBLIC OFFICERS TAKE TO THE STREETS

They led the march from the front, the outgoing and newly elected leaders of the Grenada union of teachers and the public workers union.

The militant unions as they transition between leaders signalled to government that they are not backing away from the fight for their 4 percent increase in salaries.

Members of the PWU were a welcomed addition to the struggle which had been previously led or dominated by teachers. 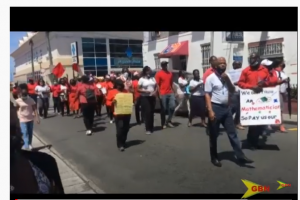