As Grenada and the rest of the world is on the verge of celebrating the 30th anniversary of the United Nations’ Treaty on the Convention of the Rights of the Child, Clinical Psychologist Dr. Augustine Panchoo has declared that a lot of lip service has been paid to the convention and not real action.

Since signing onto the convention in 1989, Dr. Panchoo says Grenada has only addressed the programmatic issues.

Grenada has failed to make major changes to the laws that will seek to give justice to parents, victims and survivors of child sexual abuse and child sexual crimes.

Panchoo was addressing the recent judgement handed down involving sexual misconduct of a minor.

Dr. Augustine Panchoo is attached to the ministry of Social Development.

Though agreeing with the opinions of many on the leniency of the judgement, he believes the magistrate was within the parameters of the law.

Dr. Panchoo impresses that it is the existing laws which have become antiquated is the important factor that needs to be amended.

Alluding to what he describes as a life sentence handed down to the minor involved, he highlights what was experienced is the perpetration of one of the most extreme sexual crimes.

Dr. Panchoo believes the child does not feel protected, neither does the parent feel protection was given by the state, which should be mandated to do so.

The clinical psychologist who works in the juvenile justice system at the Grand Bacolet Rehabilitation Center says this case hits home, because all of the residents at the facility have experienced some form of childhood adversity or traumatic event.

The latest case to draw the public’s ire is that of 24 year old Treverson Roberts, who admitted to sexual assault of a 5 year old. He was fined $2,100. ($1,500 for the court and $600 towards counselling fees) with no jail time. 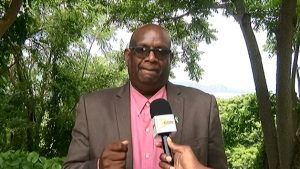