While some sectors including unions as well as workers in Grenada have been calling for the minimum wage issue to be addressed meaningfully, others are looking on with an apparent sense of caution.

The private sector believes that another conversation must be held if efforts to address minimum wage can be done earnestly.

The Covid-19 pandemic has cut open wounds of economic strife among ordinary citizens who are faced with rising inflation, cost of living increases while salaries remaining the same, or even slashed in some cases.

As the conversation on minimum wage continues Private Sector Senator Christopher De Allie says a change of mindset of Grenadians will be critical to ensure any minimum wage increase is effective.

Senator De Allie says the discussion is not as simple and straightforward noting the complexities of adjusting minimum wage for the entire country and categories of workers.

Prime Minister Dr. Keith Mitchell was recently quizzed on the issue and noted that labour minister Peter David has been tasked to lead the process of engagement with the various stakeholders.

The private sector senator says the poor attitudes and efficiencies of employees at the workplace will have to be superimposed with the minimum wage conversation.

He reiterates that adjusting the minimum wage upwards is not enough by itself.

Senator De Allie says the culture and environment within the Caribbean are major contributing factors to workers’ mindsets.

Thus, the private sector senator notes that the conversation on a change in mindset must be had in order to truly hold discussions on minimum wage increases. 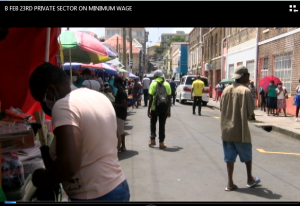