Some of the nation’s educators have come under fire again from the Prime Minister, following what has been described as a poor showing of athletes at the first Secondary School Games Zonal Meet, which took place last week at the Kirani James Athletic Stadium.

Prime Mnister Dr Keith Mitchell did not mince his words during Tuesday’s post cabinet briefing, saying he is willing to loose political support if an action he takes would benefit the children and hurt the politics.

He says he is convinced the teachers as a whole want it and students want it, but the ‘fly in the ointment’ is the principals.

He says there were principals who were very active, doing everything they can to sabotage the meet.

‘How can you be Christian? How can you say you love children and you’re doing everything to hurt the children?’ the prime ministered questioned.

He claims that some physical education teachers are being abused for having done everything possible to facilitate the games.

The Prime Minister pointed to the acting sports coordinator Curlan Peters as one who was abused for doing his job.

There will be four preliminaries zonal games before the staging of the national games.

The second zonal game is scheduled for Thursday March 14th, at the Cuthbert Peters Park in St John. 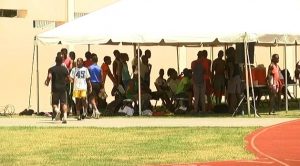