Principal urges safety on the internet as ‘Momo’ scare continues

One school principal is advocating for children to be taught the proper use of the internet.

He was at the time responding to concerns raised over the latest cyber threat ‘Momo’ who has reportedly been linked to children’s death in the US.

Young children are said to be the targets of a Cyber bullying meme ‘MOMO’, although recent reports suggest it may be a hacker’s hoax.

The character which appears in the form of a woman with bulging eyes, is reported to be appearing in children’s’ cartoons and games, giving instructions that can result in self injury.

Locally, concerns were raised regarding the safety of our children using their devices\gadgets.

Although no official advisory has come from Grenada’s Ministry of Education, as done in some Caribbean territories, GBN reached out to principal of the South St. George Government School, Davis Adams, on what he has done to raise awareness.

Mr. Adams however believes people sometimes wait too late before putting a stop to situations before it escalates.

He says teaching children how to use the internet and the gadgets they own properly will help to mitigate their exposure to viral ills.

Adams says constant monitoring of what children are exposed to is a must at all times. He considers it a parental responsibility.

The momo character challenge is said to have first come to light after the death of a twelve year old Argentina, girl who left behind a video. 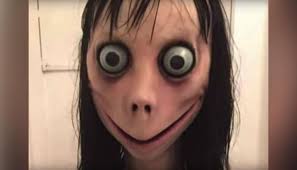