Prime Minister and Minister of Finance, Dr. the Right Honourable Keith Mitchell has welcomed Grenada’s removal from the threat of being included on the European Union’s Tax Jurisdiction Blacklist. Grenada faced the threat of blacklisting because it had not yet complied with or committed to complying with internationally recognised good governance standards.

The newly published 2019 blacklist shows that Grenada is not included on the list which is regarded as a tool for EU member states to combat what is perceived to be tax abuse and unfair tax competition.

A fact sheet issued by the European Commission Tuesday states that “”Following the commitments in 2017, many countries have now delivered the reforms and improvements that they promised, and 25 countries from the original screening process have now been cleared.”
Grenada is listed among those 25 countries.

Reacting to the news, Dr. Mitchell said, “This is a welcome development. While I maintain that we were unfairly threatened with blacklisting, I must commend the staff of the Ministry of Finance and Legal Affairs for undertaking all that was necessary to ensure full compliance with what was being required of us. I believe the removal of this blacklisting threat certainly complements the positive developments we are currently experiencing on the economic front. Going forward, we must safeguard and maintain what has been accomplished.”

To demonstrate its compliance with international standards, Government repealed and amended several pieces of legislation, which in the EU’s assessment, offered preferential tax treatment to companies that are not domiciled in Grenada and therefore considered a discriminatory practice. 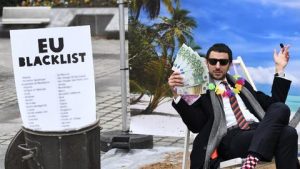