Grenada has become a signatory to the CARICOM Multilateral Air Services Agreement, which is intended to make the Caribbean Community a more liberalised environment for CARICOM airlines.

Prime Minister, Dr. Keith Mitchell signed the agreement at the just-concluded inter-sessional meeting of the conference of heads of government of CARICOM in St. Kitts and Nevis.

Dr. Mitchell was among four CARICOM leaders who signed the agreement on Wednesday, bringing to nine the countries that have now become signatories.

The “CARICOM Multilateral Air Services Agreement expands the scope for airlines owned by CARICOM nationals to provide air services throughout the community.”

The agreement “allows for no restriction on routes, capacity or traffic rights and should facilitate increased intra-regional travel and provide more cargo options for exporters and importers with resulting cost savings.”

Meeting in a special session on transportation, Dr. Mitchell and his CARICOM colleagues agreed that “member states should undertake a review of their domestic taxes and other charges relating to the air transportation sector, with a view to simplifying and streamlining the relevant tax structure.”

Dr. Mitchell also signed on Wednesday the declaration of intent to provisionally apply the Protocol on Contingent Rights.

According to the communique of the meeting, this would “apply the measures that allow their nationals to benefit from the provisions of that agreement on contingent rights, allowing spouses and dependents of skilled workers who move to another country to access services such as education and health on the same basis as nationals.” 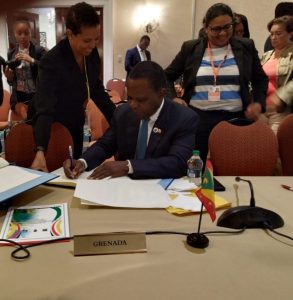