It was nomination day on Tuesday for members of the public workers union with three candidates publicly announcing a run for the presidency.

The union which represents the majority of public officers has been seemingly taking a backburner approach while the Grenada union of teachers has dominated the limelight while leading the fight for the 4 percent increase in salaries.

The PWU election campaign has been marred with reports of internal strife between two of the contenders who serve on the current executive.

President of the Public Workers Union Rachael Roberts confirming her candidacy for another term in office with contract work among others as her goals to be resolved.

Elections for the Public Workers Union is exactly two weeks away and new kid on the bloc Arthur Pierre has publicly announced his bid for president while appearing on GBN’s Good-Morning Grenada program.

He says there are more important things to focus on.

Former PRO Brian Grimes who has already contested the elections for president against Rachael Roberts last term is unperturbed by the latest development.

He says he is very optimistic and confident about his chances.

March 16th is the scheduled date for elections. 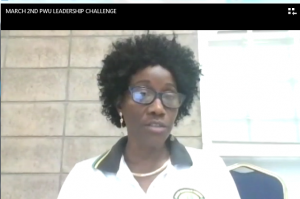