The St. Andrew’s Presbyterian Church affectionately called the Scots Kirk has been the symbol of Presbyterianism in Grenada since 1833.

It was built by Scotsmen who were residents in Grenada and wanted a church of their own. Construction began in 1831 and was completed in 1833.

In September 2004, hurricane Ivan destroyed the sanctuary, except for the north wall to which the tower is attached, and the south wall, leaving what looked like book ends.

The pews, granite baptismal fount, antique pipe organ and piano were all crushed by the roof and 3-ft thick walls. 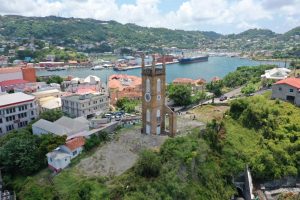 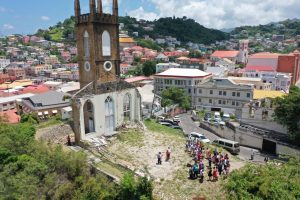 Exactly fifteen years and one day later, the sod turning ceremony to officially begin the reconstruction of the Presbyterian Church in St George’s took place on Sunday.

Reverend Doctor R. Osbert James, minister and moderator for the Presbyterian Church in Grenada says they have partnered with the Webster Memorial United Church in Jamaica, to raise funds for the rebuilding.

Visiting members of the Webster Memorial United Church were present for the symbolic sod turning and Reverend James says there is a great historical significance to the church’s rebuilding.

The Presbyterian minister says since Ivan, members have been congregating in Knox House, which is actually the church hall.

Fifteen years of hiccups and hindrances later, James highlights that the new church is designed to capture the old, while having its own unique features.

The project comes at a cost of just under three million EC dollars, with a duration of between nine months and one year. 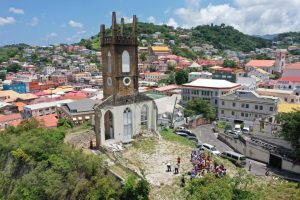 The new building will consist of two stories and reconstruction of what is considered a significant portion of Grenada’s history is expected to begin in September.