The plans and preparations for the reopening of Grenada’s borders is being put in jeopardy on two sides.

Despite the safety net, Minister of Health Nicholas Steele says loopholes are still possible which will threaten the preparations made.

The plans and preparations include 70 to 75 contact tracers trained and activated this week; a PCR testing facility being commissioned this week at the General Hospital with SGU as the backup.

However, this the minister says can be compromised despite them seeking to certify more quarantine facilities. 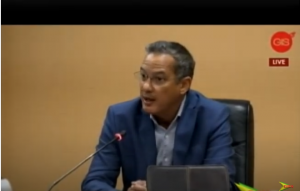