In an exclusive interview with Minister for Tourism Clarice Modeste-Curwen on Wednesday she told GBN that discussions are ongoing with cruise ship companies and arrangements are now in place for the return of Grenadian cruise ship workers stranded onboard various ships.

She said the ball now rests with the cruise lines to make the final move to get the first batch of citizens home.

The tourism minister said the cruise lines are also contemplating a sub-regional approach to drop off the workers at various island points.

The tourism minister told GBN they are looking to bring back the workers in two phases due to the amount of quarantine centres that will be needed; but promised that they will all be brought back to Grenada.

One cruise worker who continues to reach out to GBN said that all Grenadians onboard her cruise ship and those on other cruise ships have all been placed on the same ship.

She said that no further information has been given about their next move. 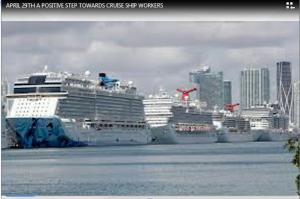