The situation remains unchanged on day two after operations at the St. George’s port were brought to a halt on Thursday.

What should have been a busy day at the St George’s Port for a normal Friday operation was instead an apparent ghost town as some operations remain halted.

The situation stemmed from a mandate by some of the workers represented by the Grenada Technical and Allied Workers Union.

Such a decision was taken following the controversy surrounding an ongoing FIU investigation into irregularities in the Grenada Ports Authority internal audit whereby officers attached to the unit approached workers while on the job to accompany them to assist with investigations.

TAWU had contended that the action taken was pursuant to ongoing negotiations as to how the police conduct investigations at the port.

General Manager of GPA Franklyn Redhead had strongly condemned the action taken by the union as illegal.

GBN was informed that a number of people who showed up at the Port on Friday to conduct business were left with no alternative but to leave.

GBN was able to reach out to President General of TAWU Andre Lewis who relayed that a meeting among Labour Minister Peter David, Labour Commissioner Cyrus Griffith, TAWU, and management of the Grenada Ports Authority was held on Friday.

Lewis says the meeting was a positive step and a follow-up is expected next week however the status quo in terms of operations at the port remains the same until the issue is resolved. 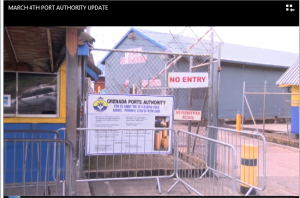