The late Edward Seaga was portrayed as a model politician for the region, as Grenada’s Prime Minister joined with regional counterparts in celebrating his life in a farewell ceremony on the weekend.

Dr. Mitchell was the first to pay tribute to the iconic Jamaican politician, who was the fifth prime minister and the leader of the Jamaica Labour Party from 1974 to 2005.

A Caribbean icon, Edward Seaga was described as a true friend of Grenada.

Dr. Mitchell says the late Edward Seaga was a personal friend as well as a friend of the New National Party and to Grenada.

He adds that the late former prime minister was an instrumental figure during the 1983 intervention in Grenada.

“Thank you for your courage you displayed in supporting the invasion, intervention…. Whatever you want to call it, of Grenada in 1983. There may not have been unanimous support in the course of action taken then, but I am convinced you were acting in Grenada’s best interest, and for that we thank you,” Dr. Mitchell said.

Prime Minister Mitchell explains that Seaga, the Jamaican prime minister at the time, also played a pivotal role in the merger of the Grenada Democratic Movement with three other political parties to form the NNP.

“As a member of the GDM then, I recall Eddie being very instrumental in the process and it’s by no means a coincidence that the NNP like the JLP uses the colour Green.”

Dr. Mitchell highlights that the late Edward Seaga was one of the regional leaders he looked up to and sought advice from on political and social issues.

“Edward Seaga was regarded as a thinker… one who gave a deep consideration to political and social issues that no only affected Jamaica, but the wider Caribbean. Party politics aside, he had the ability to transcend the geographic boundaries of Jamaica and see what was needed in the wider Caribbean. He was an advocate of social justice and he was fearless in defense of positions that he believed in.”

The Grenadian prime minister notes that the legacy of Edward Seaga must live on so that new and emerging leaders could seek guidance from his life and values. 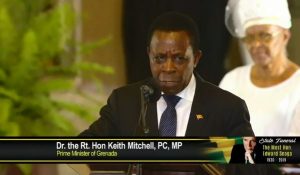