Prime Minister Dr. Keith Mitchell is seeking to demystify concerns that members of his security detail were being unfairly over paid.

The issue captured social media and mainstream media over the past 24 hours.

“I decided I cannot do without these individuals. So the choice was either we pay them and keep them to protect the Prime Minister, or we let them go and bring new people around me for six months, nine months, in some cases a year and a half, well, no way.”

According to Prime Minister Mitchell, the decision to keep his security team on the job, was as a result of a directive made by the RGPF’s executive arm, over leave accumulated over time.

“Leave were accumulated and all these guys said the law said you must take it… and I said ‘no no no, so when you take it, who’s gonna protect the Prime Minister? Just pick up anybody anywhere and put them around the Prime Minister?’ Well unless I don’t like my life,” Dr. Mitchell explained. He further added that the decision was not to pay people for leave, but to only pay those who refuse to go on leave.

The NDC’s Claudette Joseph addressed the issue during Tuesday’s to the point programme.

She says it is her understanding that this as an issue of “preferential treatment”, for some police officers.

“What am getting is that these are the only people Prime Minister Mitchell wants and therefore they get this special treatment not afforded to their peers. So that points to all of us are equal but some of us are more equal than others if the Prime Minister has a preference for me.”

Joseph added that it should be a case where sufficient police officers are trained in order to allow for rotation of personnel.

“Can’t the commission of police assign other persons, especially if you have 14 in all, there must be some way you could rotate them,” Joseph argued her point, a guest on Tuesday’s To the Point Program.

However the Prime Minister says it is also a concern of National Security.

He added that the only police officer that was paid to remain on the job was Head of the FIU Tafawa Pierre, who currently has 200 plus days’ vacation leave pending.

“Security is not something for the average fella on the ground. Several key decisions that he is involved with, that if he goes, would be affected negatively. The decision was, do we risk the name of the country, do we risk the security problems, or we pay him? Because again, if he doesn’t take it, he loses it. Is it fair because his wife is a Minister? For him to lose it while others get the opportunity to go on leave? We made a decision.” 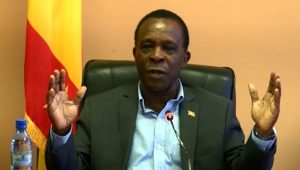 Grenada Unemployment Rate Down By 34 Percent