Prime Minister, Dr. Keith Mitchell on Tuesday delivered remarks at the launch of a year of action by the Global Commission on Adaptation (GCA).

As a co-commissioner of the GCA, Dr. Mitchell is one of the champions for greater attention to adaptation as a means of addressing the impact of climate change.

Earlier this month, the GCA launched a flagship research report which advocates the need to accelerate action and support for climate change adaptation.

Through the upcoming year of action, the GCA hopes to advance the recommendations of the report, which is to accelerate adaptation worldwide and improve human well-being and bring about more sustainable economic development and security.

Prime minister Dr. Keith Minister has pledged Grenada’s full support for the work of the Global Commission on Adaptation.

Dr. Mitchell says for too long the emphasis has been on responding to climate change and the mitigation of greenhouse gases.

He highlights that the research done by the GCA demonstrates the need for a new focus of adaptation.

The prime minister while elaborating that Caribbean countries continue to witness firsthand the effects of climate change notably the onslaught of intense storms, says adaptation is the way to go.

Dr. Mitchell notes that adaptation and resilience is being seen throughout the Caribbean, with Dominica attempting to become the first climate smart country following the devastation by hurricane Maria.

He urged his international colleagues to action. 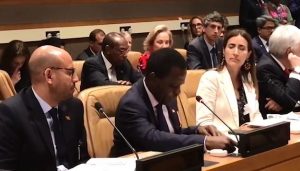