As people reflect on the tragic events which played out in the country over the last two weeks, there are calls for intensified efforts to offer psycho-social support for people who have faced traumatic situations.

Some wonder if this would have resulted in a different ending to the Trevor Regis story.

Having interacted with workers from varying walks of life during his career as a trade union Leader, Mason says he gets it.

He gets the fact that people suffer in silence and that they need more help than they know.

He thinks that Regis’ case should not be allowed to end as a story of an angry man reacting in the wrong way, but one that would send a wakeup call to Grenada, that there needs to be some form of outreach to people who suffer trauma.

While people chew away at possibilities, others point to the need for intervention. Mason was not the only one. Nephew of the deceased as well as another young community member cites this need.

One person for example, said that from what was gathered, it is apparent that the police may be tempted to use the words uttered by Regis in the GBN interview against him.

However, as one writer said on a GBN post, the comments made by Regis should have gotten the police off their butts and sent them flying to get psychological help for him and his family. 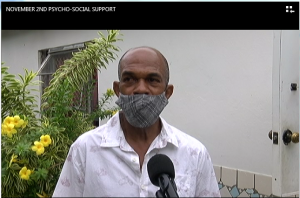