The Passport and Immigration office at the Sir Eric Matthew Gairy Botanical Gardens has been abuzz, as applications for E-passports rush in.

The reason for such urgency is because from November 1st Grenadians will pay more for passports.

Since the announcement of the increase in e-passports two weeks ago, the passport and immigration office has been flooded with people wanting to take advantage of the old price before the deadline.

Despite the large crowd, Head of the immigration department Assistant Superintendent Leroy Joseph says it has not been very challenging for them. He says they have extended hours to facilitate people applying for the new passport.

From November first, the price of an E-passport will increase from one hundred and seventy-five dollars to two hundred and fifty dollars, seventy- five dollars difference.

The E- Passport which was launched last year is the new passport being issued.

It comes equipped with over forty-two features which makes it easier to conduct transactions, unlike that of the previous passport. 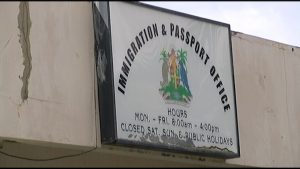 Youth Before The Court