A Budget Loan Authorisation Bill will be presented tomorrow, Friday, when the House of Representatives meets.

This bill seeks to authorize the Minister of Finance to borrow specified amounts of money, to cover the period August to December 2019.

Once the bill is successful, the Prime Minister, who serves as Finance Minister, can borrow from various sources, up to one hundred and eighteen million, eight hundred thousand EC ($118,800,000.00) dollars.

The interest rate and terms of payment are to be negotiated.

Also down for discussion is the Customs Amendment Bill 2019, which seeks to amend a typographical error.

Among other considerations, this bill provides for the planning, management and protection of coastal areas, including protection of species of special concern, use of restricted areas, permits and prohibitions on the use of the environment and powers of arrest.

Parliament begins at 9 in the morning. 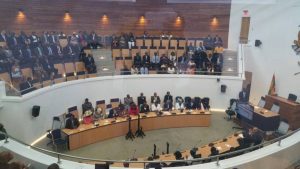