The Lower House on Friday approved a supplementary budget of 9.9 million dollars, to service the state from August 1st until year end.

Additionally, approval  was given for the Budget Loan Authorization Act, which authorizes the Minister of Finance to borrow one hundred and eighteen million, eight hundred thousand dollars over the same period.

According to budget documents, the nine million, nine hundred and sixty seven thousand seven hundred and ninety dollars  (EC$9,967,790.00) supplementary budget allocation, will be made for varying areas.

It will cover the period August 1st to December 31st .

“In essence Mr. Speaker, we are topping up their NIS Pension Funds, to ensure that those retirees receive at least 70% of their last salary. In other words Mr. Speaker we don’t have a dispute on pension. What we have as a dispute is what is being introduced as gratuity,” the Prime Minister told the Parliament.

He says 600,000 will seek to support the work of the integrity commission.

“There have been a number of ongoing inquiries or investigations or both… in fact it is well known that the whole issue of the Marketing Board is on, some people have been asked if its dead… No it is not dead at all, it is on. It’s not under the government directly, but we’ve been advised by the Integrity Commission they are moving and they indicated that the resources in the budget were not sufficient and they needed another six hundred thousand dollars to continue their work.”

One million for the procurement of pharmaceuticals is also budgeted for according to Dr. Mitchell, particularly for the treatment of cancer and kidney diseases patients.

“Mr. Speaker, that is an area of serious concern. I’ve seen it personally myself, members of families, constituents of North West and am sure people all about have experienced it and that’s a tough one, because we are seeing more and more incidence of kidney failure and related diseases.”

Another 1.3 million was listed as expenditure in salaries for nurses.

He says the One hundred and eighteen million, eight hundred thousand, will be borrowed from the World Bank to support the CARCIP project and other initiatives.

“So we already have the loan agreement, but in order to access it says you cannot borrow more than what was approved previously, so we must come back here and we are coming under this loan authorization resolution to ensure that we have the permission to accept three more billion dollars.”

Minister Bowen says the World Bank and the various Ministries have looked at the projects under CARCIP, which includes the digitization and transformation of the public service and they are ready to move forward once authorization is given.

Members of the Senate will debate the bills on Thursday. 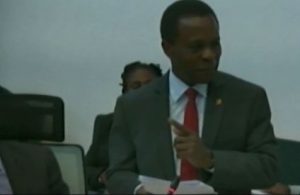