The 54th Annual Carriacou Regatta Festival Committee recently unveiled the 2019 Schedule of Races and Day and Night Events. Following the tradition of holding the “Oldest Traditional Regatta in the Caribbean “ on the first weekend of August, the four day festival will get started early on Friday, 2nd August!

The party begins at 4:00pm in Jupa Village, the Main Stage Area, in the Center of Hillsborough! “Party in the Street” with Cultural Performances, Drummers, Dancers and the Grand Opening Ceremony at 7:00pm followed by a concert by the Dream Life Family Band.

Saturday, 3rd August, highlights an addition to the Festival, “Chase the Race Round the Island VIP Cruise” boarding in Windward as well as Boat Boat in Hillsborough Bay. Live drone coverage of all day’s races will be featured on the big screen, Jupa Village Stage.

Sunday, 4th August, is deducted to the children. To insure that the next generation has a  connection and understanding of Carriacou’s Seafaring Heritage, Sunday is
“Ya Gotta Regatta” Kids Day at the Esplanade. Children will be introduced to
old school Coconut Sailing Boat Races, Model Boat Racing, Optimist and Lazer Classes Races and an afternoon of games and competitions, including a Treasure Hunt. Parents are encouraged to bring their children to be a part of The Carriacou Regatta fun!

To complete Kids Day, LOOK UP, IT’S A FIREWORKS SPECTACULAR, 8:00pm, at the Esplanade, another first for The Carriacou Regatta Festival! A Premier Event for the Festival, a professional fireworks display,  will light the skies over the Hillsborough Bay. Viewers are invited to view the show from The Esplanade!

And not to disappoint, The Festival brings back the ever popular Donkey Race, Monday at 4:00 pm on Main Street and The Greasy Pole on The Jetty at 5:00pm.

Night Events, every night of the Festival, offer a wide range of entertainment and the popular cruises are ready to sail!

The Carriacou Historical Society and Museum is hosting “ The Seafaring Heritage and Culture of Carriacou Exhibit and a Gallery Showing of The Seafaring Art of Canute Calliste.

In addition, local artists will display their art in a new event, Chart Your Course Art Show. Visit The Carriacou Regatta Festival Jupa to view this special show.

The culmination of the four day event is the Closing Ceremony and Prize Giving at 7:00pm, Monday, 5 August, on The Jupa Stage, and the Presentation of The Carriacou Festival Committee’s First Annual Lifetime Achievement Awards honoring persons who have dedicated their lives to Carriacou’s Seafaring Heritage. 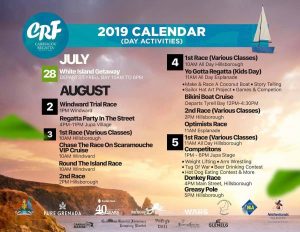