An unprecedented second consecutive term in office as president of the fifth assembly for the SIDS dock has come to an end for Prime Minister Dr. Keith Mitchell.

This was the sixth assembly for the small island developing states which was held on Wednesday.

In giving remarks as the outgoing president, Dr. Mitchell highlighted the impact of covid-19 on small islands and their economies. 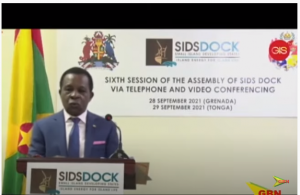