The use of offensive weapons continues to be a major concern for the Royal Grenada Police Force, which has noted an increase in its use during criminal activities.

This was revealed by Corporal Sherwin Noel attached to the Community Relations Department of the RGPF.

Corporal Noel explained what is termed an offensive weapon.

He further detailed that an offensive weapon can be made of a seemingly ordinary object.

Corporal Noel was a guest on GBN’s To the Point program.

On Tuesday 38-year-old businessman Godwin John, was sentenced to 10 months in prison, after striking a sergeant of a police over the head with a bottle after the lawman attempted to break up a fight. 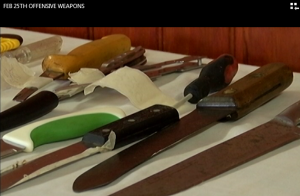