The unveiling of the Independence Logo and theme took place two weeks ago with no word on the national wear.

It was somewhat a back and forth on Monday to garner an update on which piece of clothing was selected as the National wear following a competition staged in November 2019.

Well, finally our news desk was told by the chairman of the national celebrations committee John Williams that there will be ‘No national wear for independence 2021’.

CEO of the Grenada Cultural Foundation miss Shirma Wells was optimistic that the national wear\dress would be ready in time for Grenada’s 47th Anniversary of Independence.

Williams said there’s still some fine-tuning to take place which calls for collaboration between concerned entities.

The competition started back in 2019 with the semi-final round held last November.

Over twenty pieces were submitted with the final five selected.

The designs were displayed in front of a panel of judges, hoping to be adjudged the best piece for the national wear.

The winner was expected to be announced before Independence on February 7th, 2021.

The theme for this year’s celebrations to mark independence is “Rebuilding together a safer more resilient nation in these challenging times.”

Plans to proceed with the annual Independence Day Parade are still in the talking stage with the Royal Grenada Police Force – for what may be a virtual parade due to COVID19 regulations. 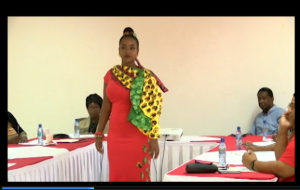