Teachers are not budging, as they continue to stamp their authority for the four percent salary increase, due since the end of January this year.

As recent as Wednesday, teachers took to the streets once again in protest mode for their 4%.

The GUT president disclosed Thursday’s plans; however remained tight-lipped as to the actions they intend to take in the coming days as protest action according to him, escalates.

Government is now agreeing to pay by December; something Andall believes makes no financial sense.

Initially, government was not positioned to give a specific date for payment and proceeded to ask for a deferral which the teachers rejected.

The GUT president says they have given a commitment to accept payment no later than the end of May this year. 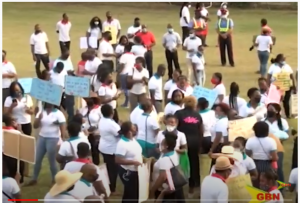