NO BODIES, NO CLOSURE

The families of people who lost their lives 37 years ago on Fort George, St. George’s continue to live without closure, and another voice has been added to the call for the United States to come forward with information that has been missing for over three decades.

Without the bodies of slain Prime Minister Maurice Bishop and members of his cabinet who were executed on then Fort Rupert on October 19th, 1983, there is no closure.

The thoughts of former diplomat during that period Kennedy Roberts.

He has echoed the sentiments of many Grenadians, that families of the deceased, and by extension the country, are still no closer to recovering the remains, following the massacre 37 years ago.

Appearing on To The Point on Tuesday, Mr Roberts says reports about what took place immediately following the assassination on the fort have circulated, but the aftermath is what is missing from the story.

Mr. Roberts, who is now deputy chairman of the NDC, says the onus is on the Americans to come forward about what happened to the remains.

The annual ecumenical service was held at Fort George  in remembrance of those who died on 19 October 1983, when soldiers of the People’s Revolutionary Army opened fire on demonstrators who had just freed PM Bishop from house arrest.

The 17 people who were convicted for the killings were released from prison over ten years ago.

Two of them…Phyllis Coard and one other died  this year. 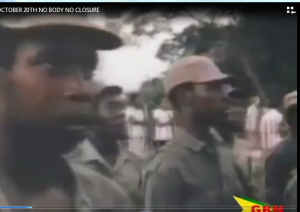