Beast mode in terms of preparation has begun in earnest for one marathon runner looking for continue what is now becoming a tradition.

Despite the difficulties and setbacks of injuries, Philomena Robertson is keen on representing Reach Within at the New York City marathon later this year and Boston Marathon in 2023.

It is close to that time of the year again, just two months away from the 2022 TCS New York City Marathon.

Local organization Reach Within continues to have its work of helping children who experienced trauma supported via fund raising efforts of its race representative Philomena Robertson.

As recent as Sunday Ms. Robertson was in preparation mode as she participated in a half marathon to get her acclimatized to race conditions.

Reach Within is a nonprofit organization that transforms childhood trauma into healthy living by advancing Trauma-Informed Caregiving in Grenada and the Caribbean.

Robertson has been representing Reach Within at a number of marathons over the years including the New York City and Boston Marathons where the proceeds from donors go toward the organization.

She was satisfied to run within three hours on Sunday for the half marathon which she notes can be built upon towards the New York City Marathon in November. 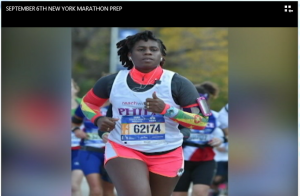 PROUD OF MY HERITAGE PROJECT