New Ambassador to Grenada Wei Hongtian, has attributed the new chapter of friendship between both Countries to the personal commitment and efforts of their leaders which has helped to deepen political mutual trust.

Presenting his credentials to Governor General Dame Cécile La Grenade on Tuesday the new ambassador also hailed the partnership between both countries in the fight against COVID 19.

He assured his willingness to further his diplomatic relations between Grenada and the people’s republic of China.

Governor General Dame Cécile spoke about some of the support received from the People’s Republic of China that has generated successful results. 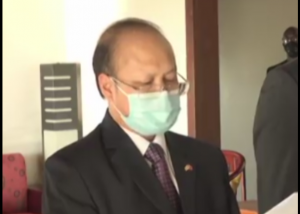