Needles found in oranges on the weekend, attracted the attention of the praedial larceny task force.

The fruits were bought from a vendor on Saturday in St. George’s.

Putting an end to farm theft remains a constant challenge for that department.

Police are seeking the culprit responsible for needles found in oranges bought over the weekend.

One consumer walked into the central police station on Monday with the injected fruits, after nearly consuming them.

“Saturday the person would have bought a bag of oranges to make juice and in going to do so, in peeling it they observed that there were foreign bodies mainly needles stuck in the produce. So they called and came into the station and this is the result of it.”

The latest reports he says emanates from the south of the island.

Frank says a bill of sale is one requirement vendors must possess and  consumers have the right to ask questions for their safety when making purchases.

“And as you can see praedial larceny continues to be a problem plaguing the farmers. And we cannot stop it but we have to reduce on the occurrence.”

Constable Frank says with limited manpower and transportation, putting an end to this scourge is nowhere in sight.

He urges consumers to report these types of cases and not just throw away affected produce, as this will help the police in nabbing culprits.

It remains an offence according to law for farmers to taint their produce. 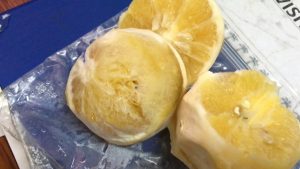 EBooks To Be Introduced In Schools