The main opposition party was sent into a tail spin two Thursdays ago when they called a late evening social media brief to announce that their political leader was calling it quits.

For some, it was a fall from grace for a party which once held so much promise that it won general elections in 2008 securing 11 of the 15 seats.

A fall from grace because such a large cross section of the populace saw the party as a viable political alternative, but now relegated to two consecutive defeats at the polls and to a position where its stability is brought into question with the recent resignation of Political Leader, Franka Alexis Bernadine.

In the transitionary period, The Deputy Political Leader Adrian Thomas ascended to the throne.

He hopes the party will throw their support behind him.

“Persuader” has announced his intent to compete for the leadership of the party.

The acting political leader said the party is placing itself in a strategic position to lead that fight when the election bell is rung.

The drivers of public debate have gone into selection gear, opining on who will the best leader for the party. With no seemingly viable option within the present ranks, some have tossed to former Prime Minister, Tillman Thomas, others have been TOUTING (TOW-TING) the man the party calls Marchie, that’s Michael Church, a former senior Minister in the NDC government.

Nazim Burke, who lost his seat twice, could also be facing a recall, but he has so far dodged the public opinion bullet.

Just who emerges to the top leadership position is no doubt, something that all of Grenada will keep their eyes and ears keenly attuned from the get go in 2021. 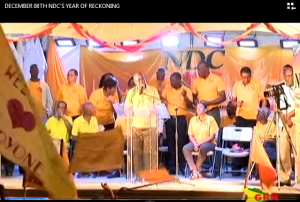