It there a future for the Imani program under an administration led by the National Democratic Congress?

Hundreds of young people are solely dependent on the government run Imani program for their livelihoods.

This was the question posed to political leader of National Democratic Congress Dickon Mitchell during a recent town hall meeting, and this was his response.

Under a NDC led administration, Mitchell says the exploitation of Imani trainees will be no more as young people will not be used as cheap labour.

The political leader notes that individuals under the Imani program are being denied the benefits of a permanent job while providing labour at various establishments.

He says Imani workers are being branded as trainees because their salaries are reportedly below the minimum wage. 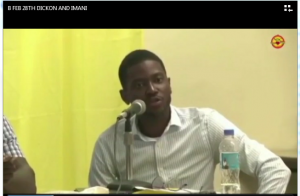