International soca monarch Hollice Mapp “mr. Killa” is giving Grenadian youth a lifetime opportunity to develop some of the skills needed in the music industry.

Mr. Killa has launched a competition, which would be critical to a successful musical career while opening the vast amount of opportunities for youth.

The songwriting competition targets young people 18 years and under with lucrative prizes which includes the opportunity to work with Mr. Killa, other artists and his production teams.

Mr. Killa tells GBN that the competition would run within the schools and communities, to encourage young people who have a passion and love for music to learn about song writing.

The international soca monarch says a gateway is being created, with song writing as the first base whereby intellectual property rights would be a focus of the competition.

“At the end of the day a lot of artistes are not registering their music properly, they are not with copyright organizations, so they are singing songs but they are not eating from the songs they put out,” Killa explained.

Mr. Killa, who has exploded unto the international scene in recent years, says he is hoping to encourage potential songwriters, artists and musicians by showing them how they can survive in the music industry.

“That’s why I wanted to do the songwriting competition because at the end it we would also teach the youths that this could actually bring you money.”

The soca superstar says he is giving the youth the opportunities that he never had.

After writing a song, Mr. Killa highlights that it must be submitted before July 26th.

Mr. Killa says his instragram page and most schools have the forms for application.

Veterans in the music industry around the Caribbean would be the judges of the competition.

International Grenadian stars such as Amanda Seales, Glenda Cox and others according to Mr. Killa are supporting the venture.

Three thousand dollars is the first place prize money however Mr. Killa says all the prizes may be increased to incentivize young people by showing them the rewards available. 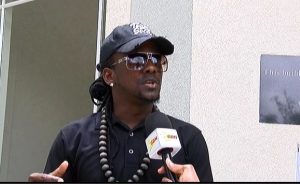