A mentally challenged man, one might describe as a hoarder, continue to  stock pile loads of old clothes, garbage, empty bottles and other used items that have created an unsightly and unhealthy environment for himself and people living close-by in the Limes St. George’s.

On Wednesday GBN again visited the area of the mentally challenged man known as Sexy, where residents say the stench emanating from the collection and rats, flies and cockroaches are too much for them to deal with.

Jim Ferguson who lives and operates his workshop just in front of the garbage pile says this has been going on for years. People have intervened to clean however the collection is repeated.

Another concerned individual who does not want her name to be mentioned but has done all she can to assist the sick man, says the situation is costing her a pretty penny. She told GBN she reached out to the Grenada Solid waste Authority for assistance but was given an ultimatum.

She says now that sexy is hospitalized, it will be more of a challenge to care for him as there is no water in the house. When contacted on Wednesday Minister for health Nickolas Steele told GBN that within one week from today, the situation would be addressed.SOT 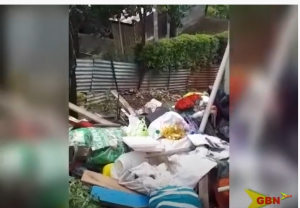