The high court has granted permission to Mount Pure Mineral Water to file an application for judicial review.

The water company’s legal team is contending that the procedures adopted by SMCto secure contracts for potential vendors and sponsors during carnival are wrong.

“In order to apply for judicial review, you have to go through a process seeking leave first or permission of the court to apply for judicial review proceedings. What we are contending is that the procedure adopted by Spicemas to secure contracts for carnival was wrong and ultimately we are seeking certain declarations reflecting that they did not go about it the right way and the manner in which they did it effectively excluded the sale of Mount Pure products for the main carnival activities,” Attorney representing Mount Pure Mineral water, Ruggles Ferguson told the media, after the hearing.

He says interim relief was also granted, where Spicemas Corporation is not allowed to add these clauses in the contracts for potential vendors for carnival.

“The give an interim declaration, stating that to put those clauses in the contract would be in violation of the public procurement act. So we have 14 days now to actually file the judicial review proceedings.”

When asked if the water company will be able to sell their water for carnival 2019, the attorney had this to say.

“Well we are contending that the process is illegal. Part of the challenge is just 2 – 3 weeks away and because of the process that the court will not be able to determine that matter finally. So that is up in the air as to whether or not it could be done.”

Ferguson said that this legal matter in nowhere geared at barring competitors, but rather, provides equal opportunities for all vendors across the board.

Spicemas Corporation was represented at the hearing by Sheriba Lewis from Kim George and Associates law firm. She opted not to comment on today’s proceedings.

However the SMC sent a release subsequently, which read as follows:

The Court has not given Mc Queen Enterprises trading as Mount Pure, express permission to sell water products at carnival events for Spice Mas 2019.

There was no determination made as to whether the Public Procurement and Disposal of Public Property Act applied or not, as the court held that this was arguable and is to be ventilated at a full trial of the matter.

Permission was granted to Mc Queen Enterprises (trading as Mount Pure) to file Judicial Review proceedings within 14 days. Spicemas Corporation wishes to advise that all vendors who have been issued a vendor’s licence that the vending licencing process is now closed. The corporation does not anticipate that there will be any further issues in relation to the contents of the vending licences.”

“I feel sad as a Grenadian I had to be put through this. I never thought I would ever come to Grenada trying to give people work and I would have Spicemas fighting me down to sit on my shoulder. So that makes me feel very say. But then again I feel happy that there are a lot of people out there they know wrong have been done to them, but are scared to stand up and fight for their right. I just want to thank the judge for giving us the opportunity to let people know you don’t have to take yes or no for an answer. If you believe you were unfairly treated, go to the court.” 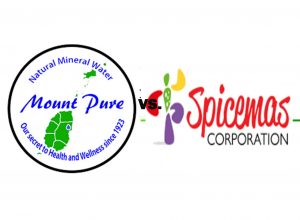