Government said eight families directly impacted by erosion at the seafront in Mt. craven St. Patrick’s as a result of the breakwater project will be relocated.

During the past months and as recently as two weeks ago, properties have been eroded as the sea continues to wash inland demolishing what’s in its path.

The government will now have to revisit the books as more studies are to be conducted to find a solution to this problem.

Residents spoke out, from fear of losing their homes. According to reports during a meeting with their parliamentary representative Anthony Boatswain, an offer of eight thousand dollars was made to persons to assist in the rebuilding process for people with lands away from the affected area.

However, this was not welcomed by some who believe more discussions should take place with residents.

Minister for Infrastructure Norland Cox during Tuesday’s media brief spoke on what has to take place in the immediate and long term.

The minister indicated that a submission was made to the Procurement board for a ‘no objection’ for a coastal engineering company to commence work. In the meantime, he explains what would take place with those families.

The infrastructure minister says the Ministry of Social Development is working with the families; three of whom have opted for a unit in the low-income houses at De Villa in St. Patrick’s.

Construction on the breakwater project began in July 2016 and came at a cost of 4.6 million dollars. The initial purpose was to protect the coastline from erosion. 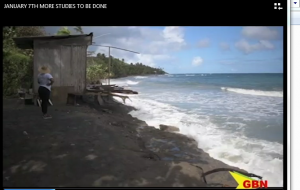 CHALLENGES AT THE LABORATORY