The suspension of the fiscal responsibility act has been extended for another period.

Citing the state of emergency as the primary condition and the economic impact of the pandemic as another, which invoked the suspension of the frl in December, the House of Representatives by way of a resolution sought an extension of the suspension.

Government has extended the lifting of the restrictions on spending as the Fiscal Responsibility Act remains suspended.

Leader of Government Business in the House of Representatives, Gregory Bowen last Friday, said the fiscal rules under the Act would have restricted the personal expenditure with repercussions if not adhered to.

The period of the extension is for the 2021 fiscal year.

Bowen said this second extension cannot go beyond one year.

Foreign Affairs Minister Oliver Joseph added that the Act would have set unachievable targets for the government.

Minister Joseph impressed that the 2021 budget was the largest public sector investment that seeks to create jobs and would have been impeded by the Fiscal Responsibility Act. 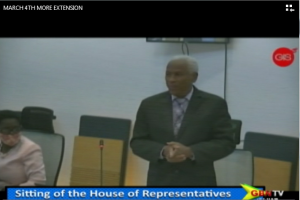