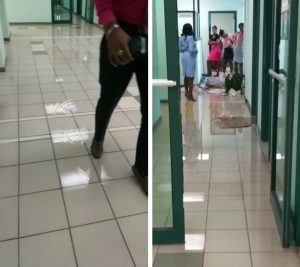 Two days of flooding at the ministerial complex had workers heading back to their homes without doing any work, as they were unable to access their offices.

Some workers at the ministerial complex were forced to return home on Wednesday, as they were unable to access their offices which were flooded.

According to information reaching the GBN news desk, workers were denied access to sections of the building as areas of the fourth, third, second and first floors were water logged as a result of broken pipes.

Sources say the problem with the pipes began on Tuesday.

That was rectified during the day, however, when the workers turned up on Wednesday morning, they discovered that another broken pipe in a different location of the building had caused severe flooding.

GBN spoke with Press secretary in the Prime Minister’s Office Philomena Robertson who said that the flooding was caused by a broken flex line in the male bathroom on the fourth floor.

About five ministries were affected including the Ministries of Agriculture, Culture, Health, Social Development and Housing and IT Department.

Ms Robertson says a janitorial company was called in to conduct cleanup and an assessment is being carried out to determine the extent of damage if any.