The Royal Grenada Police Force is condemning the act of violence inflicted on a mentally ill man by young boys.

A video making its rounds on social media shows a mentally ill man being viciously attacked by two teenagers, one of whom is a student of one secondary school in St. Andrew.

Officer in charge of the community relations department Assistant Superintendent Desmond Richards says he is saddened by these acts of violence that appear to be quite prevalent.

The two boys are being questioned by the police.

This matter and those of this nature the RGPF promises to not treat lightly. The ASP says they are working with stakeholders to curb these acts of violence in society.

The officer implores people to show a bit more empathy and to think before taking certain actions.

In a separate incident, another video that went viral showed a young man carrying a weapon during the St. Joseph’s Convent Sports Day on Thursday. The officer also spoke to that incident.

No one was hurt, and the officer thanked persons who got involved before it escalated into something more serious. 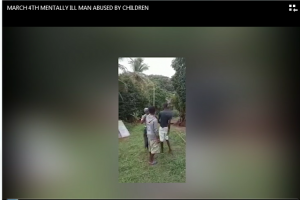