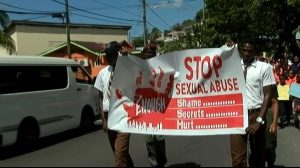 A march through the streets of the capital on Friday involved members of the special victims unit and criminal investigations departments of the Royal Grenada Police Force, students and other stakeholders in an effort to continue raising awareness towards eradicating sexual abuse.

Addressing the young people before the march, Assistant Commissioner of Police Jessmon Prince pointed to sexual violence as an age old problem plaguing society. Though this may be so he begs the answer to this one question:

The RGPFs’ second in command encouraged the young people to speak out.

‘Just tell it’ is one of the slogans used to get children to report abuse.

ACP Prince urged teachers to be confidential when dealing with sensitive cases, to avoid further complications for the victim.

Since the formation of the special victims unit last year, there has been increased reporting that has led to many arrests he said.

Underscoring the importance of reporting any known acts of sexual violence, he reemphasized the RGPFs’ commitment to putting an end to this inhumane act.

Students on the march also rose to observe a one minute silence in remembrance of Ariel Bhola, who lost her life as a result of an alleged act of sexual violence. Other victims of sexual violence were also remembered.

Social development minister Delma Thomas says 294 cases of sexual abuse were reported in 2018, with over 50 percent of reported cases occurring in the parish of St. George’s.

Minister Thomas took the opportunity to remind people of the laws against sexual and other forms of abuse, noting that the economic and social cost associated is very high.

Commending the leadership at the special victims unit for their dedication to service, the minister too urged young people to report any form of abuse. 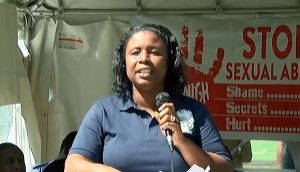 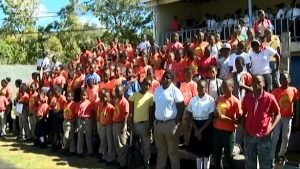 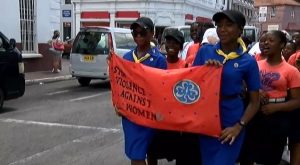 GRENADA INVITATIONAL STILL ON THE TABLE