MAN ON A TEN YEAR JOURNEY

A man on a ten-year journey around the world to save the next generation is back in Grenada.

Harold Reichanbach from Switzerland is in Grenada as part of a 10-year journey around the world that began in 2014.

The project Harold has embarked on is called G-Cubes, and aims to save the next generation he says, as it entails the collection of garbage, mostly plastic, and forming them into cubes.

His vessel “the trash hero” which set sail in early 2020 was docked in Grenada four days before Covid lockdown in March that same year forcing him to abandon his mission until now.

Ten days ago he returned to Grenada to collect his boat to complete his project.

As an artist, he says by doing art he is trying to make a statement on the problem of plastic garbage. Working in partnership with the Grenada Solid Waste Management Authority, he plans to engage at least three schools on the island in the collection of plastic trash from shorelines.

Harold has made several stops before Grenada and has worked with schools and organizations with similar interests. He plans to leave the country by May 18th for Martinique, which is his next intended stop. 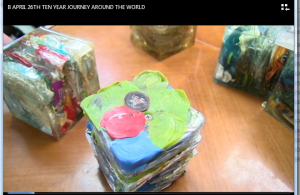