LOSING MY HOME CLOSE TO EIGHTY

A one bedroom wooden structure owned by Stephen Frank went up in flames Thursday evening.

The seventy-nine year old frank was inside his home when the incident occurred.

Stephen Frank is just two weeks shy of his 80th birthday. He is now homeless as his dwelling house with all its contents were totally destroyed by fire Thursday night.

The seventy-nine year old told GBN that he was inside the house when the fire started around 6:34 pm.

Stephen told GBN he has been living there for over forty years. His relatives and neighbors who live close by tried to extinguish the flames but were not able to do so. At the moment he has taken refuge with family members.

While at the scene of the fire, officials from the St. George’s North East constituency office visited the fire victim.

Deborah Charles they will assist Mr. Frank with immediate supplies such as food items and clothing. Arrangements to have a home reconstructed for him will soon follow.

Frank’s home was the second structural fire for 2021; the first was at Rivulet Lane Grenville St. Andrew’s, which occurred on the second day of the year. 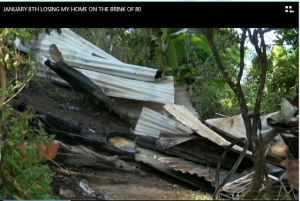 MORE STUDIES TO BE DONE