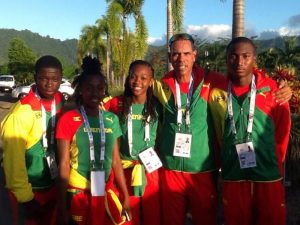 There were two 12 and under singles matches involving the boys and girls which was played on Saturday Morning.

This time there were seven players on each of the two teams, the Tanteen aces and Tanteen slammers.

In the two previous events held on Saturday May 25th and Saturday June 29th the Tanteen Slammers won two keenly contested team events 44 games to 40 and 71 games to 65 respectively.

This time around the Tanteen aces prevailed by 11 games. The scoreline being 53 games to 42 in another keen and exciting event contested over approximately 4 hours of team tennis among the players finishing under the lights.