The long lines to the various supermarket chains have now dried up despite it being allocated as shopping days.

Supermarkets and shops witnessed from Thursday a reduction in the number of customers, with Grenadians instead moving to take advantage of the two days granted for the opening of financial institutions.

Crowding in front of banks, some credit unions and other institutions such as Money Gram and Western Union were recorded on Thursday, however on Friday a different picture was painted.

As citizens continue to feel the financial effects of COVID-19 and the restriction of movement to curb the spread, while some await the relief promised by government, many were on the receiving end and leaning heavily on remittances from family in the Diaspora. 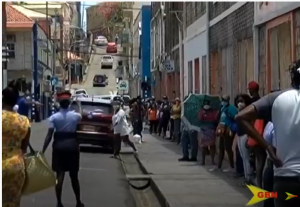 COVID-19 WRITING ITS OWN STORY