Charges have been filed against the government of Grenada for the July police shooting of Gouyave resident Jamal Charles.

The 24-year old was shot in the leg by a corporal of police after a party of officers from the Gouyave police station turned up at his mother’s home.

Reports say the officers were at the time in search of Jamal’s brother for questioning in an ongoing investigation.

Jerry Edwin, Attorney at law for Gouyave St John gunshot victim Jamal Charles, says a notice was served to Attorney General Darshan Ramdhani stating that they are prepared to accept an out of court settlement or compensation for his client.

However according to Attorney Edwin, this was rejected by the attorney general.

Edwinsays they have decided to takeit a step further, filing a lawsuit claiming damages against the government.

The officer responsible for the gunshot was investigated by his peers and the report on conclusion was submitted to the office of the Director of Public Prosecution for consideration which later revealed there was nothing wrong in the actions taken by police.

GBN contacted the attorney general for a response to this latest development and he told our news desk there isn’t much that can be said on the matter at this time. 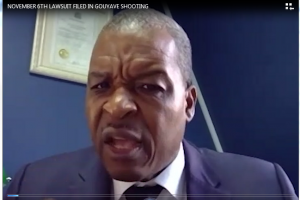