It is an initiative undertaken by the government of Grenada and the United States government.

The project which has already gotten off the ground, comes at an estimated cost of 3.9 million US dollars. It is expected to be complete during the first quarter of 2021.

Upon Completion the facility will house the operation and administrative functions of the National Disaster management agency.

The US government has played an integral role in the construction of this National Emergency Operation Center, Disaster Relief Warehouse.

Ambassador Linda Tag-le-a Taylor highlighted their contribution towards this and other projects on the island, noting that Equipment for both facilities on the mainland and Carriacou have already been approved.

Senator Garraway says he looks forward to the completion of this new facility.The center according to senator Garraway will serve as the focal point for coordination of the islands emergency planning, training, response and recovery efforts. 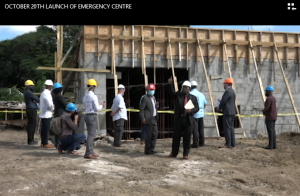 NO BODIES, NO CLOSURE